Ringtone Feedback: Letter Exchange with an Inmate from SCI Pittsburgh

Recently I received and replied to a letter from an inmate at SCI (State Correctional Institute) Pittsburgh. He shared his reaction to one of the tones in the project. I assume that he’d seen my appearance* on WQED‘s television show, Filmmakers Corner (hosted by Minette Seate), because the letter was addressed to me in c/o the show.

My appearance on the episode began with a shortened version of my *Mobile* Ringtone Performance. One of the tones that I played and discussed was the Western Penitentiary Whistle Tone. The man who sent the letter, who’s presently incarcerated at SCI Pittsburgh, wanted to know why I had recorded the whistle.

Locally Toned as a public work of art, is produced through a method of social practice. Instead of making and publishing a series of ringtones that I think would well-represent this region, I ask Pittsburghers for input (what tones should be recorded) and to collaborate (by working with me on audio recordings in the field). Participants answer these questions with me: “What does Pittsburgh sound like?” and “Which of these sounds should turned into ringtones to be shared with the public, free of charge?”

So lots of people have had a say regarding what sounds they’d like to hear as ringtones, but few residents of this area have provided formal (written) feedback regarding a published tone. How do people who live here feel about the content that is curated and published within the project? This man experiences the sound of the whistle in his daily life. Because he took the time to send a letter, he’s opened up dialogue about the tones as functioning signals and sounds. The letter-exchange allowed me to reflect more deeply about how experiencing a sound is very much shaped by the physical space within which it is heard. Since I consider his letter direct feedback from a stakeholder (a resident of this region), in the spirit of community accountability (Locally Toned is a public work of art), I’ve decided to publish our letters. 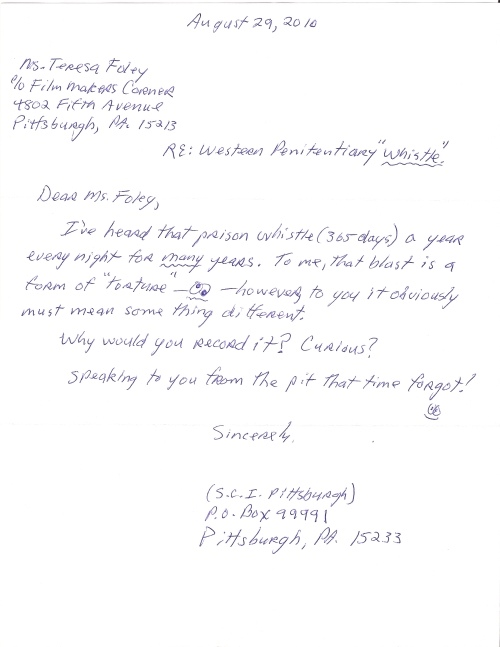