The Locally Toned slogan I came up with a couple of years ago, YOU SHOULD BE A RINGTONE, pretty much sums up the Bridgeport, CT community recording session at the Housatonic Museum of Art. That’s because the people who came out for it really let their talents and personalities “ring” true (and through) in their tones! 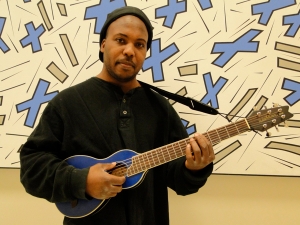 Yotisse Williams walked into the session with the smallest (blue) guitar I’d ever seen–a Washburn Rover (he later told me). Williams shared an original musical composition and vocals–here’s his  Y Tone. He also allowed me to document the performance of his ringtone with video: 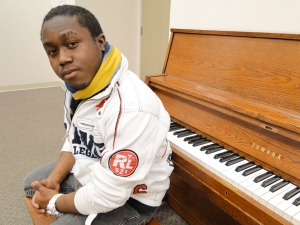 Garrick Moss told me he’d been playing piano since he was 7 years old. This is his gentle-sounding Moss Melody Ringtone.

Our next contributor was Lamont Mack from Stratford, CT. His improvised several vocalise “takes” for his a cappella contribution to the project, RJ’s Scit Scat Tone. 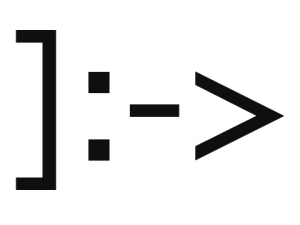 Photographer Andreas Kornfeld sent in his humorous and computer-generated Ex-Wife Alert via email. I added a tiny clip to the end of his track from audio that contributor Thiago Hersan sent into the project last year.

Officer Darrin Johnson “Munchkins,” on the security staff at the Housatonic Community College, stopped by during his break to record his seriously silly Officer Munchkins Ringtone. Johnson told me he enjoys sharing his sense of humor with people. He asked if I could add a siren sound effect to his tone (I did).

Paul Clabby, an artist, curator and (you guessed it!) tennis player, showed up with a racquet and ball to make this Tennis Anyone? Ringtone. Clabby told me he has a friend who calls a bit too often requesting to play tennis, and so he wanted to create an alert to specifically identify calls from that person. Clabby hopes others will also find his tennis tone useful, too. Check out this video, recorded by IT’S FOR YOU curator, Terri C Smith, of Clabby playing tennis while I record audio:

Nine year old Evan Rose also showed up to the recording session with his own sporting equipment to make this Click Clack Pool Table Tone. He and his father rescued the mini-table from a landfill (when a neighbor set it out on the curb one night as trash).

And just when I was wondering where all the lady-Bridgeport contributors were, we had a walk-in from Ms. Kendra Addison. She appeared during the last few minutes of our session to contribute her delightfully obnoxious LaLaLa Tone.

BTW, Bill Finch–the Mayor of Bridgeport–reportedly walked by the college during our recording session. Curator Terri C Smith saw him and invited him to make a tone. Since he was pressed for time, he couldn’t join us. Smith asked him what sound he’d choose for a Bridgeport tone, he replied, “The sound of a truck backing up!” I’ll see what I can do, Mayor Finch.

Thanks to the Housatonic Art Museum staff (curator Terri C Smith, director Robbin Zella and assistants Dominic and Nicholas Maloney) and to their supporters (!), and to all the community members and students who contributed tones to the project. Additional thanks to my brother, Don Foley, who gifted me the Flip camera so I could easily make video field recordings.