If you’ve been following the blog posts related to the Western Pen Whistle Tone, you may be interested to see this drawing from inside the institution.

This past winter, the State Correctional Institute (SCI) Pittsburgh declined my request for a visit to see, photograph, and learn more about the whistle. Since I’m interested in telling the stories about the sounds that become ringtones within this project, I’m also interested in showing the sources from which the sounds come. Over in the Manchester/North Side neighborhood of Pittsburgh, the whistle is easy to hear–every day at 8:40pm, when it goes off. It’s just not easy to see. Since I wasn’t able to take or use any actual image of the whistle, I used this scan of a vintage postcard of Western Penitentiary as the icon for the tone. 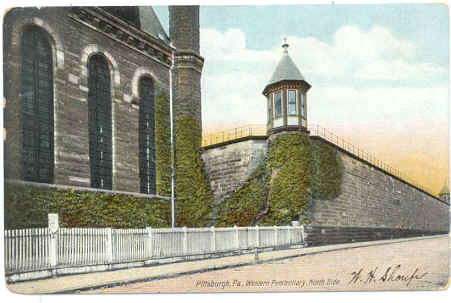 The drawing at the top of this post was sent by the male inmate who wrote to me in August after seeing my appearance on WQED’s Filmmakers Corner. In his initial letter, he asked about my choice to publish the sound of the whistle as a ringtone and expressed his reaction (as someone who hears the sound on a daily basis).

You can read our initial letter exchange here. The gentleman who drew this picture also suggested some ringtone-ideas. Since I told him I take requests for tones, I will record and publish one of his suggestions.

I appreciate that this man took the time to write back to me and to share his drawing of the whistle.